Campito, the Legendary Lone Horse of the White Mountains

In 2011 I headed up to California’s White Mountains to try to jump start my altitude acclimatization for my 97 Switchbacks at Night photo project in the next couple of days. I spent some time at the highest grove, the Patriarch Grove, above 11,000 feet exploring it for the first time. Just before I arrived there I saw a large animal off to my west. I was confused by this. There are not supposed to be large animals in the White Mountains at 11,000 feet. It was a horse! A huge magnificent mustang. He was quite a ways away, but I snapped a few photos nonetheless. A few of them I rather liked, as the contrast of this lone animal on the ridge was striking, particularly rendered in black and white with a yellow filter. 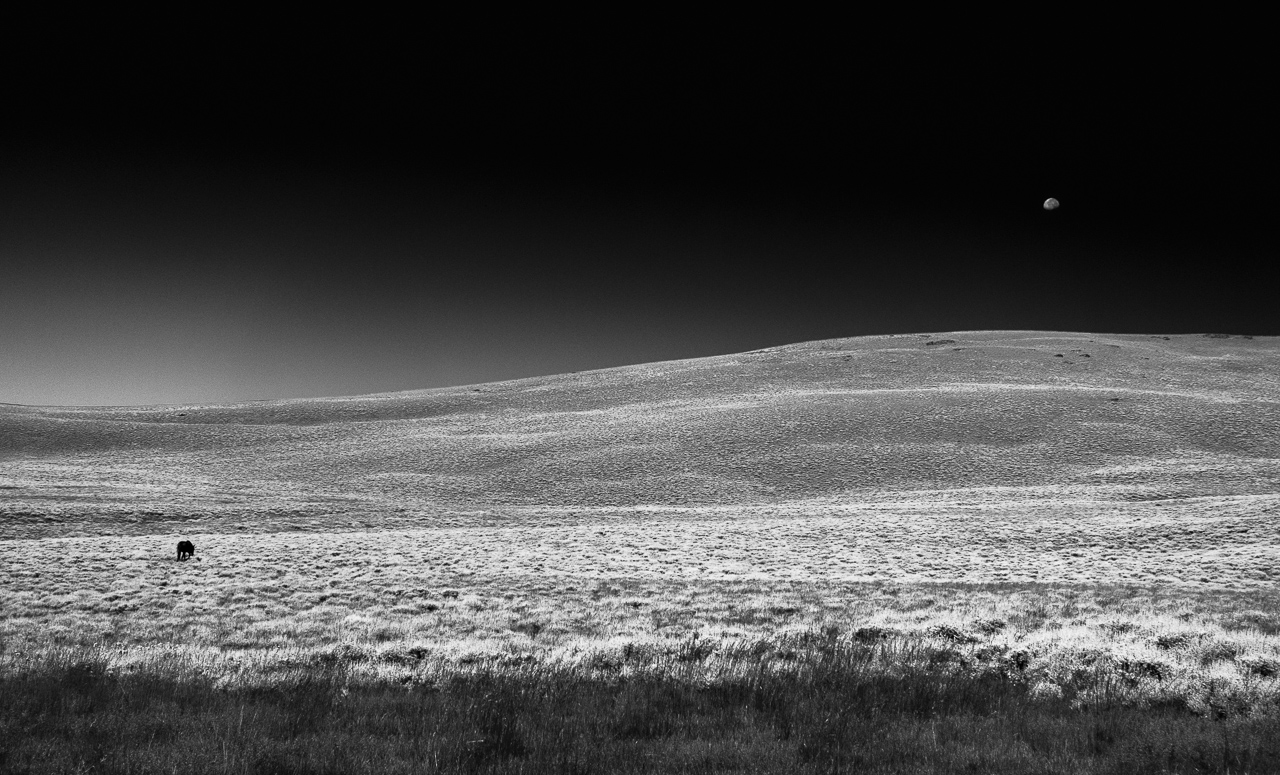 My first encounter with Campito

When I posted this image to Flickr, a fellow Flickr user George Grossman identified the horse as Campito, named after the meadows surrounding his namesake Mountain where he I learned likes to hang out and graze. I was intrigued. I then further learned of his legend, which was that he was an escaped pack animal, was solitary, had been there for decades, and that no one knew where we went during the famously harsh winters there. He was clearly healthy, and was plenty shy of us annoying humans who might try to get close, no doubt weary of his days of labor.

In subsequent visits I managed to catch a few more glimpses of him. I always tried to take some photos and he seemed to always be far away. Until one time, in 2014, when I visited the bristlecones and again was blessed with a sighting of this amazing animal. This time he was much closer than ever – close enough to get some detailed photos for the first time at 400mm at least. I carefully and quietly as I could captured some photos in the late light of the day. He did seem annoyed at the big red SUV that kept creeping around and slowly and methodically without much of a care began to wander off away. I gave the slowest possible chase from the road and for a few moments he gazed right at me, trying to ascertain the motives perhaps of a persistent but distant photographer before I watched him walk off into the Sun without the slightest concern for me. I couldn’t believe my luck to have had a chance to see him from such relative closeness, something I would never again experience. 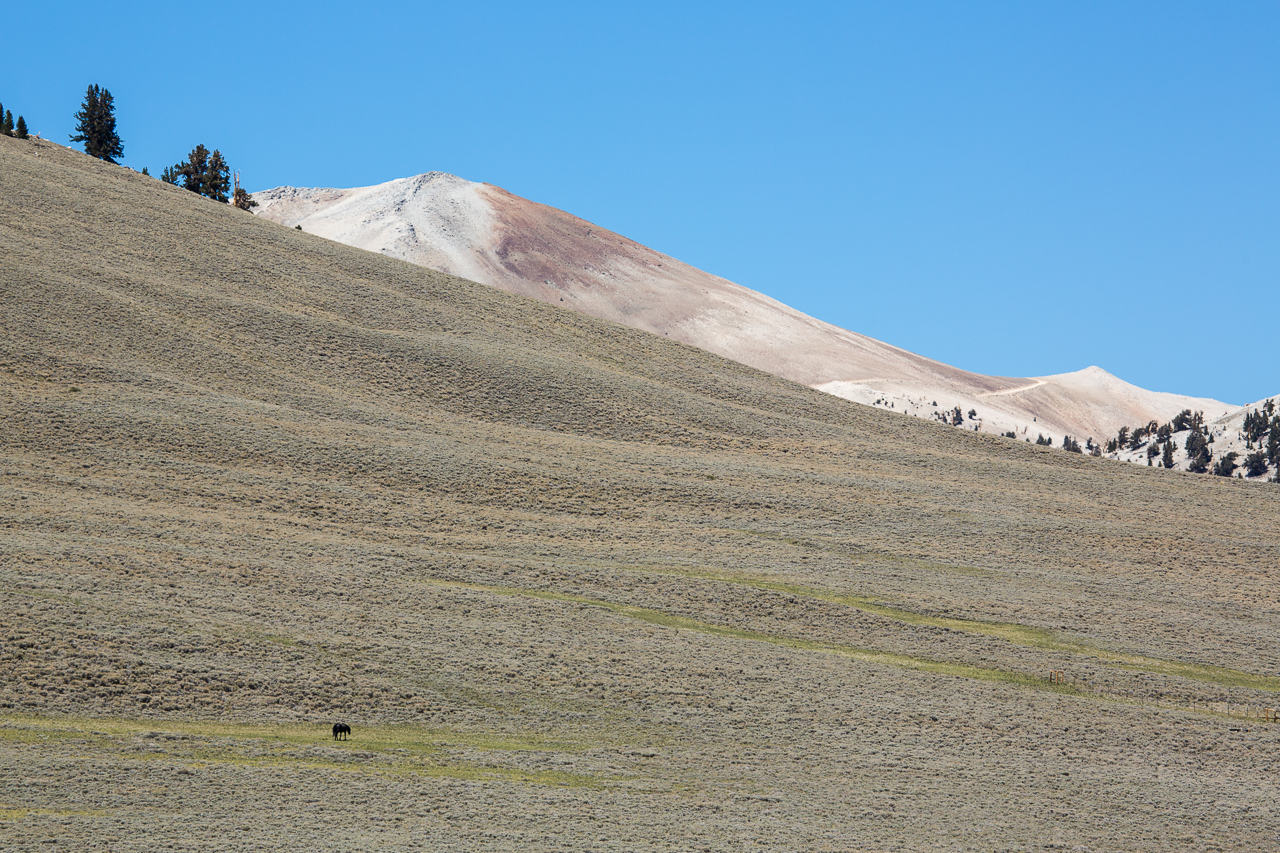 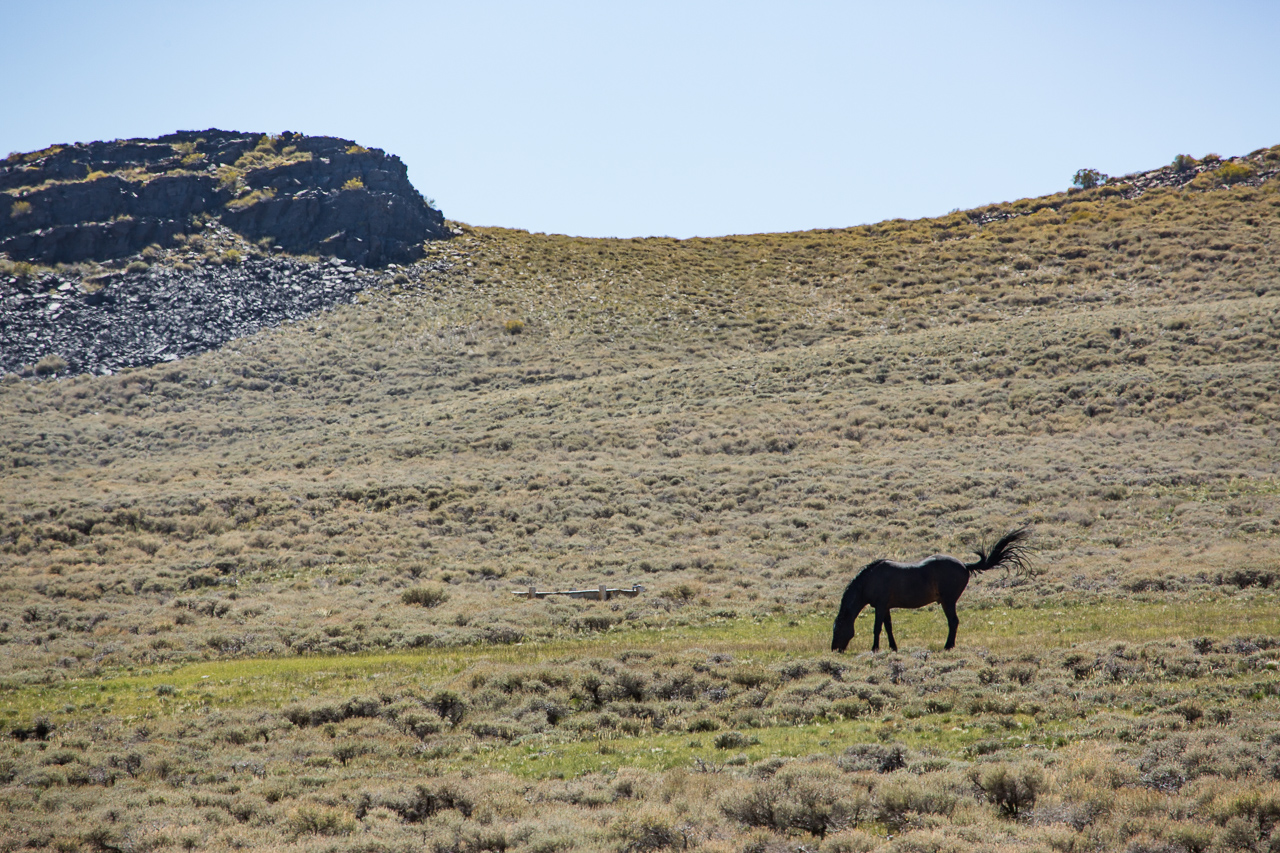 Happy flicking of the tail

I had heard of some people being able to approach Campito quite close, even giving him an apple or carrots, but I never attempted such. I was content to just be a far away observer (often wishing for reach beyond 400mm).
2014 was definitely my closest encounter. What a magnificent animal.

Who are you looking at?

Walking into the Sunset

Alas, my final encounter was in 2016, when as usual he was keeping well away of the road that ferried troublesome humans into his domain.

2016, my final encounter with Campito

A few months back I saw word on Instagram that Campito had passed on, and I was sad. I didn’t really want to believe it I guess, and I didn’t give it a ton of thought though recently the US Forest Service – Inyo National Forest confirmed that Campito was found in the lands of the White Mountains that were his home. The best guess at his age was 31 years, which is quite old for a wild horse. I always thought he was a magical sight there, and I loved his legend. He will be missed. Rest in peace Campito, the legendary free lone horse of the White Mountains.

I do hope to get back to writing non-“in memoriam” posts here on the blog in the future, universe permitting.

« The Legend of Wade Meade

© 2012 Kurt M Lawson Photography. Kurt Lawson is a participant in the Amazon Services LLC Associates Program, an affiliate advertising program designed to provide a means for sites to earn advertising fees by advertising and linking to amazon.com.|ProPhoto WordPress Blog by NetRivet Blogs