The Legend of Wade Meade 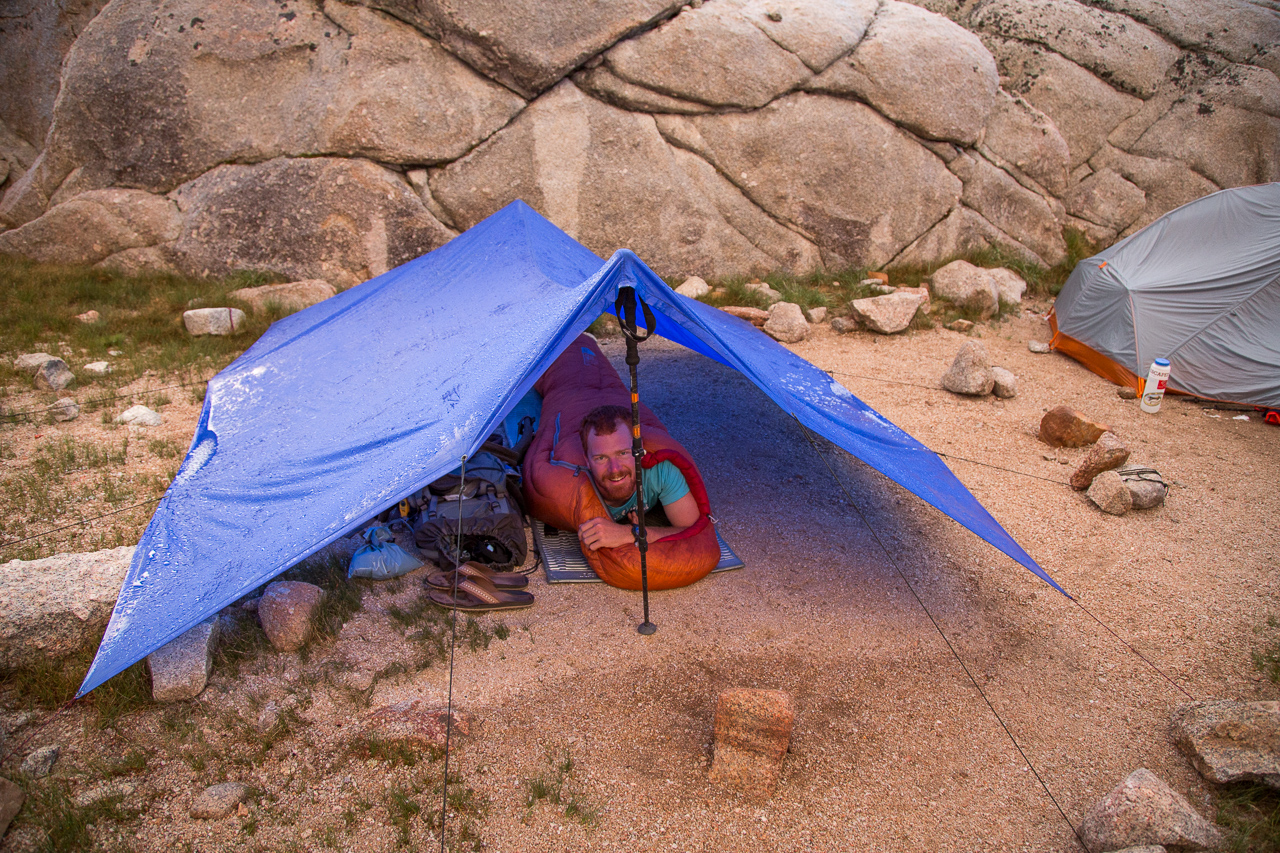 Wade in his “tent.” Note the hail.

At the beginning of April, the pandemic was taking hold. Hunkering down from the world I transitioned to working from home. Mentally and emotionally I was freaked out, just waiting for someone I know to be stricken with the invisible contagion gripping the planet. And then suddenly all together different terrible news arrived, and my emotional dam burst. Wade Meade, the legend, had passed away in a freak rock climbing accident.

What follows is how I knew Wade, and why he was and always will be a legend.

In 2011 I had completed my photo of the 97 Switchbacks at Night of the Mount Whitney Trail. I was super pleased with the result, though maybe a little less so from its failure to go viral, but I did sell a handful of posters and even a couple prints of it over the years. One of those posters went to a customer in Hawaii, Sean Goebel, who was also a landscape and nightscape photographer. Sean and his fellow photographer friend Matthew Saville contacted me in 2014 to ask about doing the 97 Switchbacks again but this time shooting time lapse from multiple angles. I agreed and a small crew came together. Matt and I would hike up the main Mount Whitney Trail and Sean and their other friend Cory Kobel would hike up the Meysan Lake Trail to then climb to the top of Mount Irvine for a truly epic view of the Mount Whitney area. Of course, the key piece of the puzzle to recreate the light trail was someone to carry the light. When I inquired as to who was going to do this part of the trip, the answer was Wade Meade. I was told he would have no problem hiking up the switchbacks at night and in fact he would probably go to the summit even.

When we assembled at Whitney Portal it quickly was evident that we were all going to get along and that Wade was more than up to the challenge of lighting up the switchbacks. Before departure we had giant pancakes at the Whitney Portal Store and the idea was floated as a joke about Wade going up the switchbacks naked. We had some laughs and after that last minute morning fuel we departed up our two trails. Sean and Cory headed up the Maysan Lake Trail and Wade, Matt, and I headed up the Mount Whitney Trail with our huge packs of camera and camping gear. Fortunately for me, the goal was just to get to camp at Consultation Lake (12,000 feet). Matt and Wade were relatively unfazed by the hike up. We set up camp for the night to prepare for the big next day.

Day two began with a thunderstorm. At that altitude, it’s pretty unsettling to have lightning inbound closer and closer until there’s no gap between flash and thunder. Hail rained down on our tent and then the storm broke right as the fresh morning sun shone upon the Sierra Crest at Mount Muir. The spectacular sunrise heralded the arrival of a wonderful day. While Matt and I scrambled around taking photos Wade stayed in his “tent” if you could call it that. It was just a tarp! A tarp supported by guylines and his trecking poles. It totally worked for Wade while I found it to be a puzzling choice of accommodation. In the morning Wade perched on a rock on the shore of the lake near its outlook and fished for trout with his bare hands. I joked that he looked like Gollum from the Hobbit.

Exploration filled the middle of the day with all three of us summiting Wotan’s Throne before preparing for the night’s photo shoot. High on the ridge line, Sean and Cory made their way to Mount Irvine’s 13,786 foot summit. By the time night fell we all made our way to positions. 8 cameras started clicking away as the granite wonderland descended into starlight. Wade made his way down to Trail Camp. And, before were were fully ready to go, we heard over the walkie talkie from Wade that he was ready to start, that he was naked, and it was time to go. I couldn’t believe it. We were hundreds of feet away from him but I had thought from my 48 hours knowing him that he was probably really going for it. “He really is crazy,” I thought. And off he went. 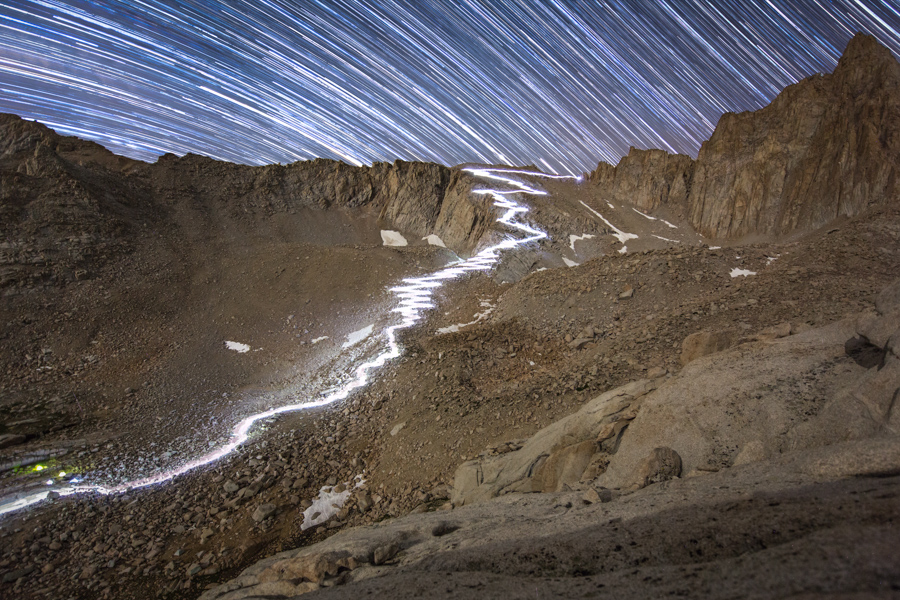 97 Switchbacks At Night 2014, illuminated by Wade

Imagine you have climbed to the top of Mount Whitney. It’s a tremendous achievement. It took you all day, but you did it. And now you’re making your way down from the summit exhausted. You are almost to Trail Camp with just the final two miles and change down the infamous 97 switchbacks, and here comes this energetic 6 foot something red haired naked guy with 7 bright headlamps lighting up 360 degrees around him as he effortlessly climbs up the trail in the dark. I can only imagine the shock and utter confusion of the people he passed on the way up, and the thought makes me laugh still to this day. When he reached Trail Crest at 13,600 feet he met the Wind, and put on clothes for the rest of the trip in the dark all the way to the summit and back.

We nailed the shot and the time lapses. There’s no mistaking Wade when he hits the trail. He’s the bright fast moving one.

Laughter ensued after it was done, and we hiked down with a mission accomplished. This Wade guy was cemented in my mind as the crazy red-haired mountain man who was up for such adventures. And we would call upon him again just two years later. This time it was for Half Dome. 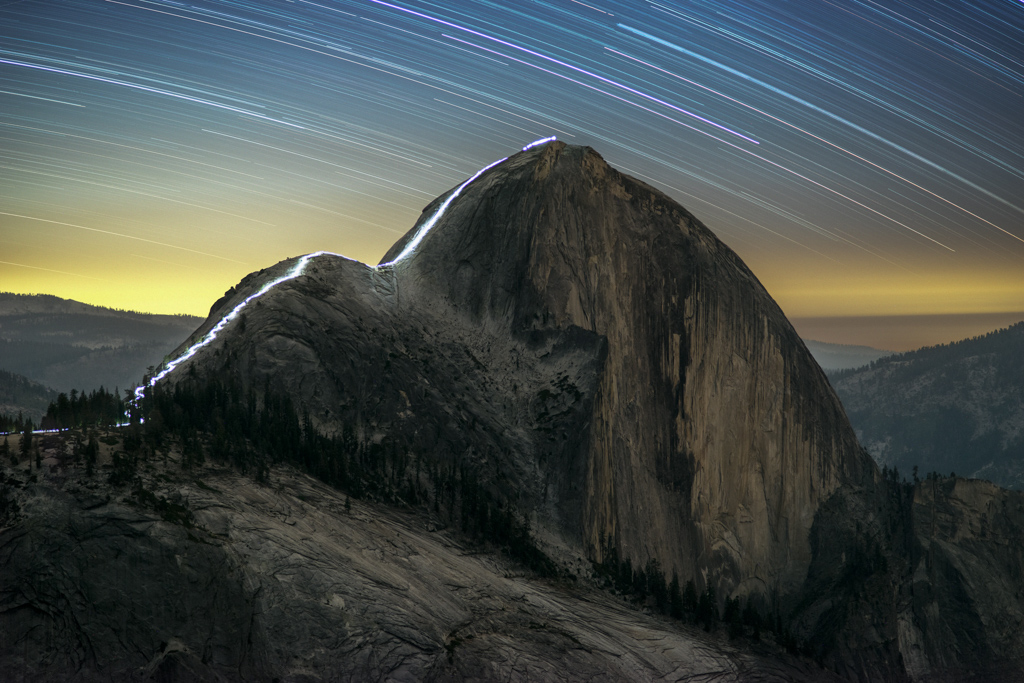 The Cable Route of Half Dome at Night, illuminated by Wade

For the Half Dome Trip, Sean and I backpacked to Mount Watkins on across the valley northeast of Half Dome. Wade, hiking solo, ascended from the Yosemite Valley Floor on up to Half Dome and waited for our signal over the walkie talkies as to when to ascend to the summit and back down via the Cable Route. From across the valley I recall jokes and stories over the walkie talkies to keep us entertained. Wade thought he saw some eyes on the way up of a mountain lion which gave him a good scare alone on the trail. Just as he had done with Mount Whitney, it seemed effortless as he scaled Half Dome in the dark and back down, tracing a light path across the famous polished granite. Wade had arranged for our sleeping accommodations in the valley the night before, and we met up with him along Tioga Pass after, with another notch in the belt of Wade-illuminated luminous light trails captured on camera. He had thought about doing Half Dome again, via the Snake Dike route, alone in the dark the next night after the Cable Route if he was up for it. That would have involved free soloing the route and us capturing from Glacier Point. I was relieved that he was not feeling up for it as that thought had me extremely nervous. Though if he wanted to do it I had no doubt he could. Once again there is no mistaking his bright light.

We didn’t have a new photo of Wade from this trip, so I always laugh at the “file photo” of Wade with all the headlamps from the Mount Whitney trip that we used in this time lapse.

This spring we were hoping to enlist his help again in Yosemite for the Yosemite Falls trail with moonbows, but first the pandemic and then tragedy intervened. I didn’t know Wade very well. I really only knew him from these two trips and some scattered interactions online, but the impression he left behind was vivid. He seemed a boundless soul of unlimited energy. His enthusiasm for participating in our night photography shenanigans was that of pure adventure. I saw his ongoing adventures from time to time through the modern social media windows. When he climbed El Capitan I thought “Epic! Of course he did!” It seemed there wasn’t much he couldn’t or wouldn’t do. Just imagine the confusion and shock of the people descending the swtichbacks in the dark and encountering him again. Ah it makes me laugh. He was in my mind and always will be a legend for that and for his generous and adventurous soul.

I am very sorry that I won’t get to adventure again with this amazing human. I’m thankful to have gone on two adventures. I wish there had been many more. My heart goes out to his family and friends. Rest in peace, Wade.

« 10 Favorites of 2019 Campito, the Legendary Lone Horse of the White Mountains »