The year comes to a close with a truly spectacular year for me, photographically. I haven’t described all my various trips, triumphs, and tribulations here on this blog because as always it is a fairly neglected outlet for me. But, with 10 images I can touch on some of the best moments and the first three images actually come from a span of about 24 hours. 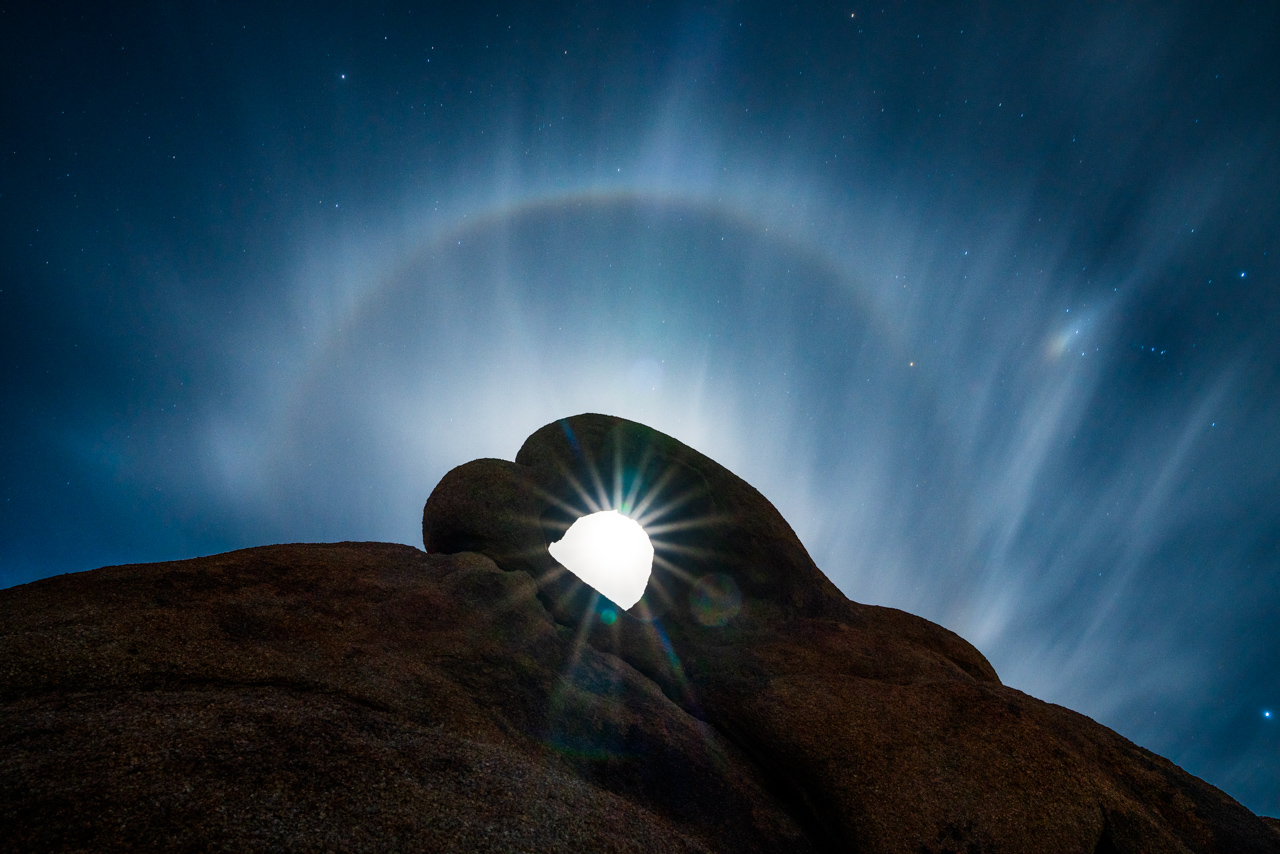 Jumping right in we start with the total lunar eclipse of January 2019. I was pondering just what to do with this event, which would be fully visible here in California. In the previous blog post you can read all about the process but suffice to say I was determined to frame it with an interesting foreground, and that was the Eye of Alabama arch in the Alabama Hills, California. The night before the eclipse I had a dry run with the full moon to figure out positions. Thin clouds overhead created a dreamy scene, producing a 22 degree halo refracting through the tiny ice crystals in the cloud. The bright moon produced the lunar equivalent of a sunstar through the camera, and on the right side of the frame the constellation of Orion is clearly visible long before Betelgeuse’s sudden dimming. This is my favorite image of the entire year. 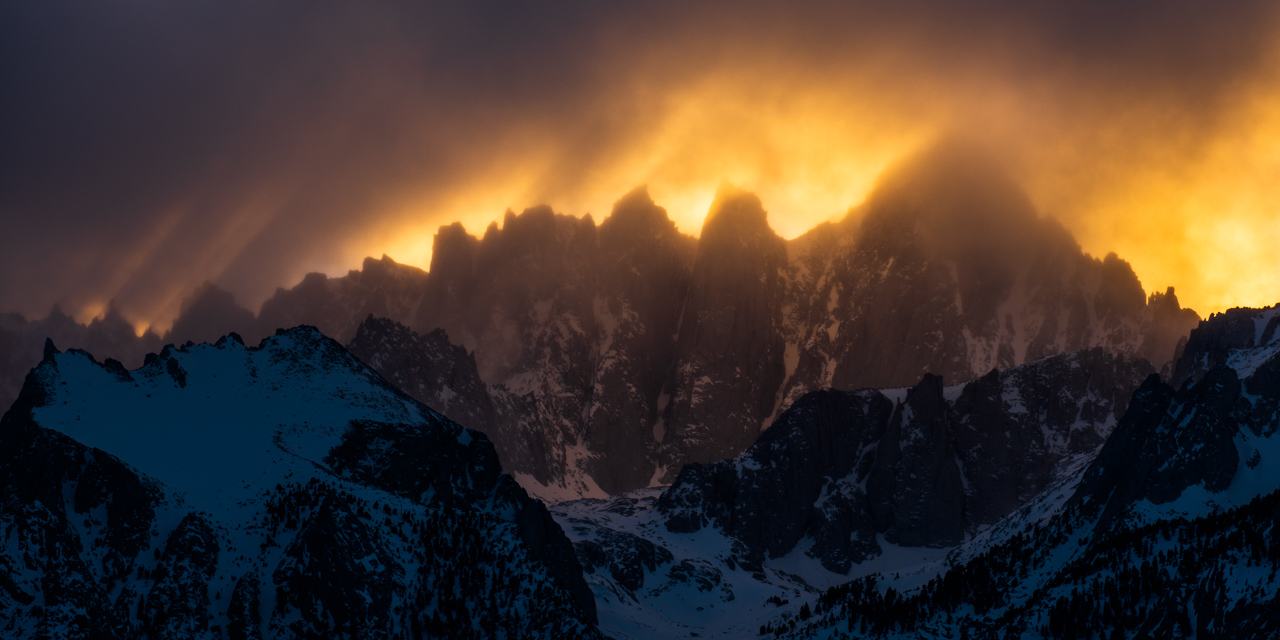 Sunset on the next evening, the night of the eclipse, produced this incredible sunset over Mount Whitney just to the west. Clouds were dancing along the crest of the Sierra Nevada, and when the sun got low enough the light turned warm and crepuscular rays beamed from the jagged silhouette of the faces of the summits. Whitney itself was partially cloaked in precipitous clouds, slightly masking the summit with freezing cold diffusion. The setting Sun’s light bounced around the clouds and embraced the cliff faces with warm glowing ambience completely real. (Fake landscape glows are something I really really do not like and I see them so often.) The color contrast between the orange light of sunset and the ice cold blue of the snowy grey granite in the foreground which was illuminated only by the blue sky above and to the east was just superb. This is my favorite image of Mount Whitney summit I have ever taken, and I have taken a great many over the last decade. 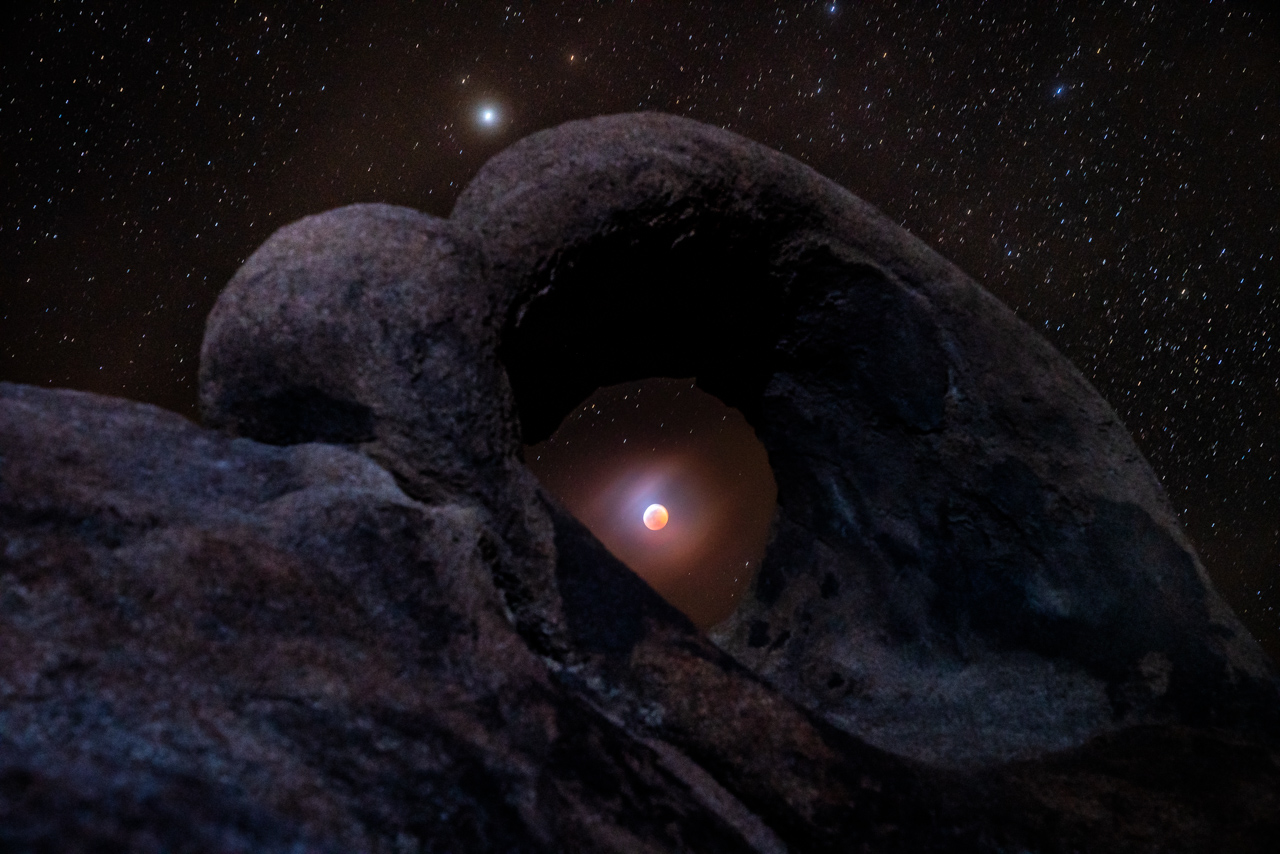 The fiery sunset was just a prelude to the main event of the evening which was the lunar eclipse. Here it is, with the red moon framed in the Eye of Alabama arch, wrapped in a halo by the thin clouds it was intermittently hiding behind. Read more about it in the previous blog post.

Moving on from the icy cold winter and celestial events, we arrive in springtime where in 2019 Southern California really exploded in spectacular wildflowers. I paid two visits to viral sensation Walker Canyon, which had just the most incredible blooming of poppies in the Temescal Mountains. The fluorescent orange poppies took over whole mountainsides and sometimes intermixed with purple flower like you can see here. The crowd was huge though only 10-20% of what would arrive the following weekend which I thankfully did not come back to. Six miles of wandering through billions of flowers on dirt trails and fire roads and it was easy to imagine I was on some alien planet where the land was orange instead of green. This image is my favorite of the ones I took that day.

The Best Way to View the Superbloom

I did return but not until two weeks later. And when I did, along with my friend Matthew Saville, we shot photos from miles away across the valley, away from the crowds. The air was hazy, but the bizarre sight of the multicolored kaleidoscope mountains was really something to behold. Fortune smiled upon us and para-gliders were taking off from the same ridge line as we were standing upon. We had moved to a spot where Mount Baldy emerged from the thick air below, towering above the relatively small Temescal Mountains in the foreground which were host to the superbloom. The town of Lake Elsinore stretched across the valley below, and a para-glider just happened to wander towards the shot I was composing. At the right moment I triggered the shutter to capture the para-glider, the town, the superbloom, and Mount Baldy all in one shot. The San Francisco Gate subsequently picked up the photo and published it.

Have you ever felt like you were being watched? That’s certainly the feeling I had when I spent the night here along the crest of the Temblor Range of mountains adjacent to Carrizo Plain National Monument. California’s super bloom continued here in 2019. Although not quite to the levels of 2017 when I first came here, the mountains were absolutely spectacular and this otherworldly scene was a true delight to discover. Purple bush lupines danced in the breezy air while a huge stone face looked back at me as I looked upon the colorful landscape. The morning was blessed with some thin high clouds to splash even more color into the sky above. This scene is one of my all time favorites to have discovered and captured.

The Racetrack. One of the most unique places on Earth, I love this place. This year I had the special opportunity to take my Dad there to see it. We had an exhausting schedule, but managed to get to the Racetrack before sunset. And when we got there, we were treated to the best sunset I have yet witnessed out there. Low puffy clouds
lit up across their bottom edges as if on fire as the red-orange glow of the Sun skimmed across their fluffy shapes. Though even without the significance of my company I would include this image on this list from 2019, it has truly special significance from my shared experience with Dad.

Finishing off spring, here is an image from beautiful Yosemite Valley in the moonlight. My first visit here in the springtime blew my mind. Waterfalls were everywhere, including many I didn’t know existed. Waterfall flows were near their peak, and Yosemite Falls was no exception. The roar from its thundering waters could be heard for miles. This night on May 11th was still and beautiful. I decided to shoot some star trails looking towards the falls. I sat on a wooden boardwalk that traverses an area that is a seasonal spring pond in Cook’s Meadow and for almost two hours sat there watching the moonlit landscape and listening to the waterfall roar and croaking frogs. The frogs, by the way, probably get credit for the complete surprise to me of a mosquito-free evening. This image was fourteen five minute exposures added together with airplane trails removed.

2019 saw the completion of a five year effort by the Union Pacific Steam Program to restore one of the largest steam locomotives ever built, the Union Pacific “Big Boy” number 4014, to operation. Back in 2011 I photographed their main locomotive #844 crossing over the Mojave River in Afton Canyon out in the Mojave desert. Knowing that 4014 was going to visit southern California in October visiting the same bridge, I decided to head out there and capture it. It was traveling the opposite direction, so I knew it would be a very different shot. I also knew that although I was on the shadow side of the locomotive, there would be enough bounce light from the cut reflecting off the shiny metal to make the shot worthwhile. After hours of waiting, 4014 chugged uphill slowly through the canyon and it was an incredible sight. Check out my video of this scene and many others as I chased it around southern California with my Dad and brother.

Finally, Thanksgiving weekend last year provided a truly rare opportunity to experience the Alabama Hills covered in snow. This area, one of my favorite places in all of California, only rarely gets significant snowfall. Rarer still are the times that snowfall lands on dates that I can actually be there away from my day job experiencing it. That was the case for 4 straight days of winter bliss. The snow also brought beautiful roiling clouds and layers of fog that hugged the ground and later ascended into overhead clouds. One vantage point, which is extremely popular on Instagram (and for good reason because it is gorgeous), produced this scene. Fog had rolled in to a patch that perfectly obscured the ground at the base of the hill. The road goes straight into the fog and you cannot see where it goes from there. Above the Sierra Nevada bask in sunlight as does the foreground, with the photogenic pyramid of Lone Pine Peak dominating the skyline. The desert ground is completely frosted over with the fresh snow. I truly love the way weather can transform landscapes like this, and while it was a tough choice to narrow down just one favorite of the whole wintry weekend, this one does fit the bill.

So there you have it. Ten favorites from a truly great year for my photography. I can’t wait to see what 2020 brings. Stay tuned.

© 2012 Kurt M Lawson Photography. Kurt Lawson is a participant in the Amazon Services LLC Associates Program, an affiliate advertising program designed to provide a means for sites to earn advertising fees by advertising and linking to amazon.com.|ProPhoto Blogsite by NetRivet Blogs