During my 12-hours-a-day 6-day week work marathon of the last week at the day job I could only briefly see the news of the fires that suddenly erupted across southern California just as a blast of the Santa Ana winds and heat arrived. The very first posts of this blog were of the “Station Fire” back in 2009, when an enormous wildfire destroyed some of my favorite hiking trails in the San Gabriel Mountains. Many of these trails remain closed in the burned areas. Last night I sat down and looked at a map of the Springs fire and became very sad since it appeared that this fire was doing the same to more of my favorite trails. This morning I decided to head out and see what I could see of the damage.

Sycamore Canyon was the first area that was burned out. However I could not really stop there as Caltrans was all over the place. The buildings there all looked like they were saved, but clearly the canyons beyond were totally burned. The entrance to Pt. Mugu had an area to stop and no one else around, so I got out to take a few pics. 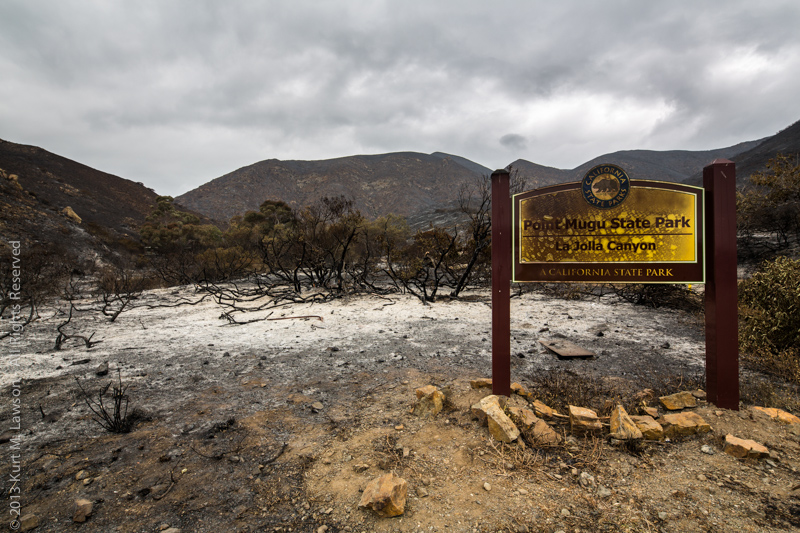 As you can see, the devastation was near total in areas the fire reached. 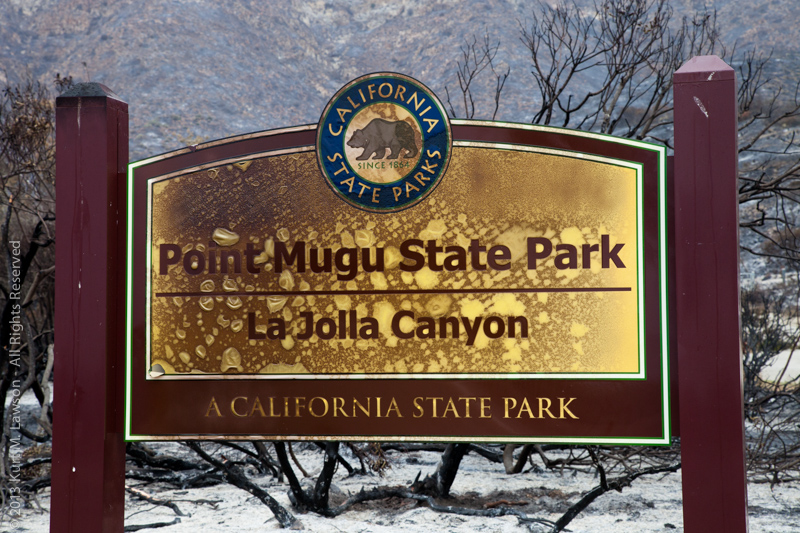 The entrance sign had bubbled in the heat, but has been saved no doubt by firefighters. 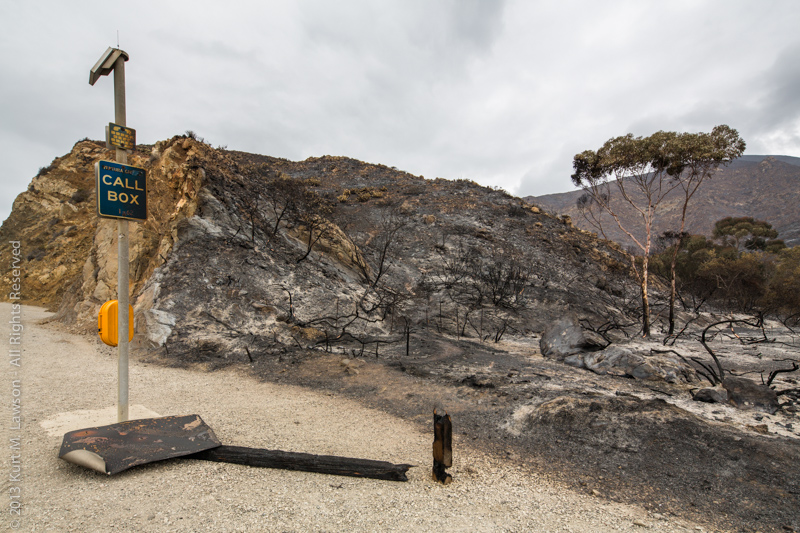 This scorched call box and destroyed sign were at the northern edge of La Jolla Canyon here just a short ways from the Mugu entrance sign. The road sign here wasn’t so lucky.

The whole area as far as I could see beyond the entrance way was just burned to a crisp. The entrance was of course blocked off and a sign warned of no entry permitted.

After Mugu I continued on. The fire jumped the PCH in a few places but was stopped. The military firing range had the palm trees at the entrance burned but the rest of the facility escaped harm. The Santa Monica Mountains on the north side from the point all the way through Camarillo are totally burned except for the area around the communications equipment which was saved. I continued driving along, getting off a the nearest east road and ending up at the Cal State University Channel Islands campus. The fire here reached the very edge of campus and was fought back. Here you can see the green campus grass and the burned hills immediately behind.

Just around the corner from the campus was the entrance to the University Glen Apartments. The entrance road was burned all around, with signs perhaps of the firefighter battle around like this odd patch of green in a sea of burned land.

A green flowering island in a burned sea

And this somewhat spared palm and bush

I took a drive up Yerba Buena Road, which I was surprised was open. I thought the fire had reached there, but instead it was over at the next road north (Deer Creek). The area I had most feared was burned appears to be ok for now. The burn maps I’ve seen have shown the fire has reached almost up to the other side of this ridge in at least one place. With full containment expected tomorrow, I’m hopeful that this means the area is safe. My next hike here will have some seriously renewed appreciation for the green-ness around me.

And finally here’s a view of what has been temporarily lost. This is a hike I did with the Sierra Club’s Wilderness Travel Course back in 2010. Here is an image looking down on the Point Mugu entrance from above, followed by a picture from today showing the location the picture was taken from with a red arrow.

Ultimately, wildfires are a part of the natural way of things here. Wildfires raged through clearing the greenery long before we humans showed up to stop them. The plant life will come back. For a long time it won’t look the same, but eventually the cycle will show us once again that it is just that – a cycle. Perhaps next weekend I will venture into the once burned areas of the Station Fire to see how the recovery there is coming along. Soon at least I will go revisit that desolation and I bet I my spirits will be uplifted by the renewal of life there. My thoughts are with the brave firefighters who are still fighting the Springs Fire. I hope it is completely contained soon.

© 2012 Kurt M Lawson Photography. Kurt Lawson is a participant in the Amazon Services LLC Associates Program, an affiliate advertising program designed to provide a means for sites to earn advertising fees by advertising and linking to amazon.com.|P4 Photo Blog by NetRivet Websites