Since I have new gear burning a hole in my pocket, I had to go shoot. The Ferris Wheel was shot on Friday night and the boat was shot on Sunday morning. Just the week before I had kayaked around the boat “Zenji” when it was docked at the gas station in Marina del Rey. It’s a really massive sailboat. 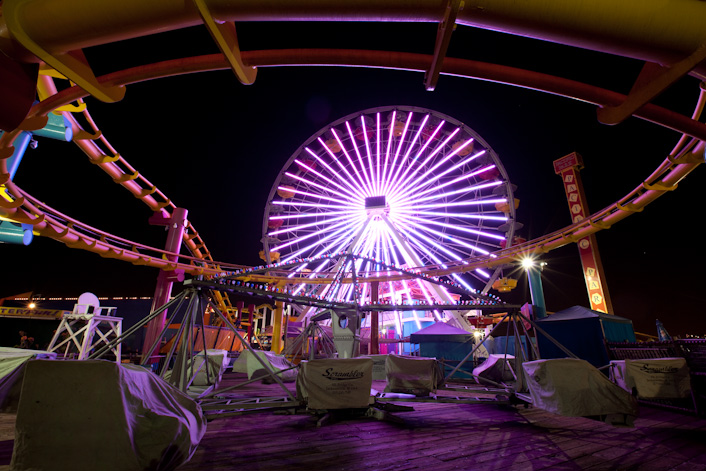 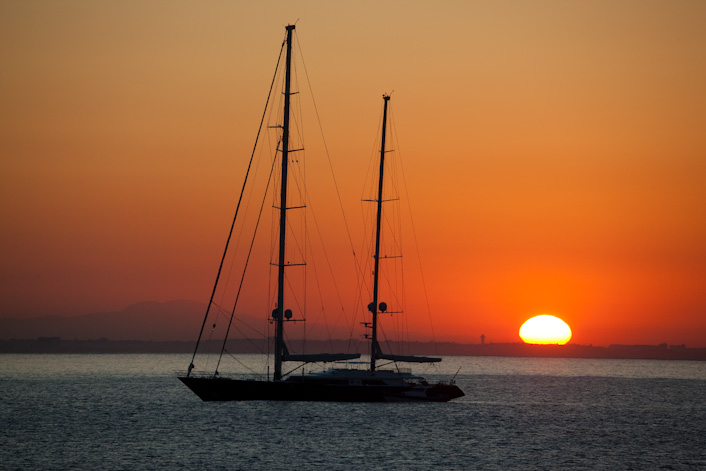 Sunrise over the massive sailboat "Zenji" 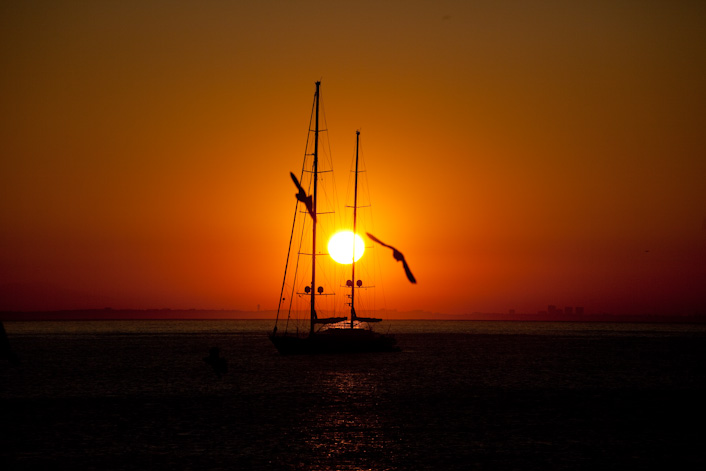 After months of deliberation and planning, I’ve finally upgraded to a 5D Mark II. I’m hoping this new camera will help take my photography to the next level. The resolution is more than double that of my 40d (21.1 megapixels vs 10.1) and I have long been looking forward having a full 35mm sized sensor. Moving from an APS-C sized sensor in the 40d to full frame means that my 10-22mm lens will no longer work, as this lens physically not fit in front of the larger mirror box. For the ultra-wide focal range I have decided to replace the 10-22 with the 16-35mm f/2.8 L lens. This is a nearly identical field of view range but for the larger sensor and at a constant 2.8 aperture. The above image, a quick snapshot on my way to work, was taken with the new combo. When I downloaded the morning’s images I was stunned to see the sharpness in the palm tree. Below are 100% crops from the raw image. There’s a little bit of processing in Lightroom (default sharpness is used). This is a tremendous improvement on image detail, and I’m really looking forward to using this new tool in the field.

100% crop near the center of the Palm image

100% crop from the top of the Palm image

100% crop of the bottom trunk in the Palm image

I have many more updates planned. I can’t wait to go out and shoot with the new gear!

Back in 1997 my Mom and I went to Aspen, Colorado during spring break. During this trip we ventured over to the Maroon Bells, a beautiful set of 14,000 foot peaks.

The valley had just been opened up after being cleared of avalanche danger. To get there at this time of year required snowmobiles, since the snow over the road was still several feet deep. Mom and I spent all morning there in the valley with just the mountains, snow, and hot chocolate provided by the little shack at the end of the road. It was a pristine and beautiful morning, and I will not forget being there.

Some of the surrounding peaks

Structure Fire at 14th and Pico

One day at work a couple of years back we spotted a huge fire a couple miles away. On this day I had my camera gear with me and decided to take some pictures on my way home if there was anything to be seen. I later learned that this was a CD duplication company. Firefighters were dumping an insane amount of water on this building for several hours.

View of the fire from work

Water jet from the top of the ladder

This fire hydrant was completely tapped

Fire continued to rage into the night

A firefighter takes a moment to rest

Justin Johnson - Those are great pictures, albeit an unfortunate circumstance. Did you give any to newspaper or TV?

Kurt - No I didn’t. Perhaps I should have tried to send some in somewhere. Perhaps one of the free Santa Monica papers would have been interested.

© 2012 Kurt M Lawson Photography. Kurt Lawson is a participant in the Amazon Services LLC Associates Program, an affiliate advertising program designed to provide a means for sites to earn advertising fees by advertising and linking to amazon.com.|ProPhoto Site by NetRivet, Inc.