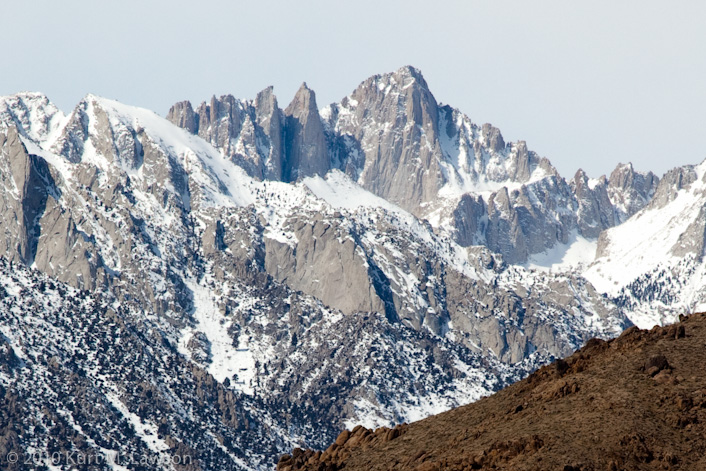 More than four years ago as I was driving through the wonderful Owens Valley. Mount Whitney caught my attention. More specifically, I had read about it somewhere and for some reason it stuck in my mind. I wasn’t sure which mountain was Whitney. I knew approximately where it was, but it didn’t stick out like I had imagined it would. Well, the reason it doesn’t stick out is because it’s further back behind other peaks. It does stick out but from the floor of Owens Valley it’s not obvious that it is the tallest peak in the Sierras, and indeed in the lower 48 states. For whatever reason this mountain stuck in my mind and I began researching it and discovered you can climb it by trail – no hanging off ropes, just hiking. I decided I would do that one day, although I had never been backpacking and had never climbed a mountain of any height.

Fast forward to 2009. I had chatted with a friend about my desire to climb Whitney. He had climbed it and a thought emerged of going up together along with some other friends. I sent in permit requests based on dates that he might be available. We got permits for late May, but realized there was probably considerable snow still up there at that point and due to changed work status for the both of us, the plan fell apart.

In 2010 a couple things changed. More resolute than ever, I elected to make sure that I knew what I was doing so I wouldn’t have to rely on a guide. I signed up to take the Wilderness Travel Course, (WTC) offered by volunteers from the Sierra Club. This was a 10-week course about what is needed to safely travel in the wilderness. I learned about backpacking in any kind of weather, carrying the correct food and items and navigating with map and compass. It was a fantastic class. I met a lot of great people and really enjoyed the outings, whether it was rock climbing in Joshua Tree National Park or snow shoeing on Mount Pinos. I can’t recommend enough learning about how to be out there safely. Things are a lot different when you are out there away from civilization.

From May to November, the number of people allowed on the Mount Whitney Trail is capped. This is done to keep the trail from becoming both the 405 of the Sierras and a landfill. To obtain a permit, you must participate in a permit lottery. You must mail in a form in February to Inyo National Forest. In 2010, four of us put in applications for Mt. Whitney permits, and two of us got them. I was offered a spot on one of the trips, and the date was set! We requested three day permits. This would allow us to hike up to camp, summit, and then hike out on the third day. This seemed the best way to go about it. Throughout 2010 I trained. I climbed local 100-foot staircases as many as 15 times in a session. I participated in extreme boot camp. I went on other trips to Rock Creek Lake and Big Pine Lakes. I did training hikes on Mount Baldy. And finally, the permit time arrived. August 30 – September 1.

Being the photographer that I am, carrying my DSLR on any of these trips has been a minimum requirement. During WTC I tried a couple of different cases, but finally settled on a Clik Elite chest pack. Using this pack kept the camera in easy reach when climbing, and helped counterbalance a little the weight of the my main backpack on my back. I wish it could attach directly to the backpack instead of using it’s own harness, but it’s been a good compromise so far. Given the magnitude of the hike – 22 miles round trip and over 6,100 feet of elevation gain – I opted to leave my tripod behind. I regretted this, but wanted to make sure I actually made it to the top. So, the entire kit was my Canon 5D Mark II, 24-105 f4L IS, and some extra cards and batteries. The next time I return to the mountain, I will be bringing my tripod, and probably my 16-35mm lens as well, or who knows what else. Whatever my legs can carry!

Here is a Google Earth map of the route to the summit. This is based on my GPS data. Click for a bigger view. From the portal at 8600 feet to the summit at 14,508 feet is approximately 11 miles with a total of about 6,100 feet of elevation gain along the trail. 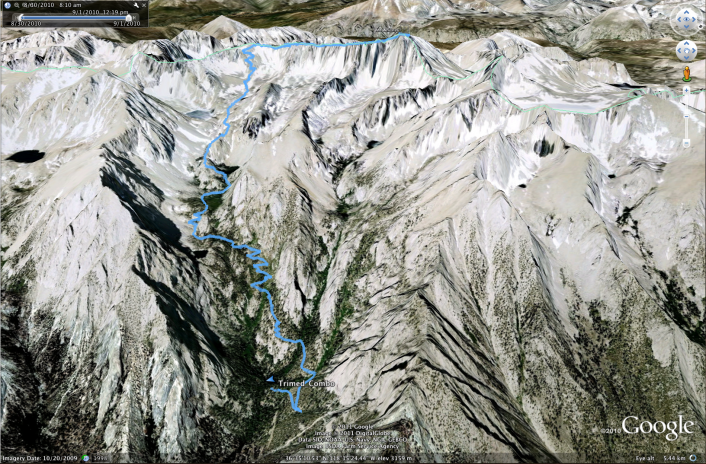 GPS track view from above the portal 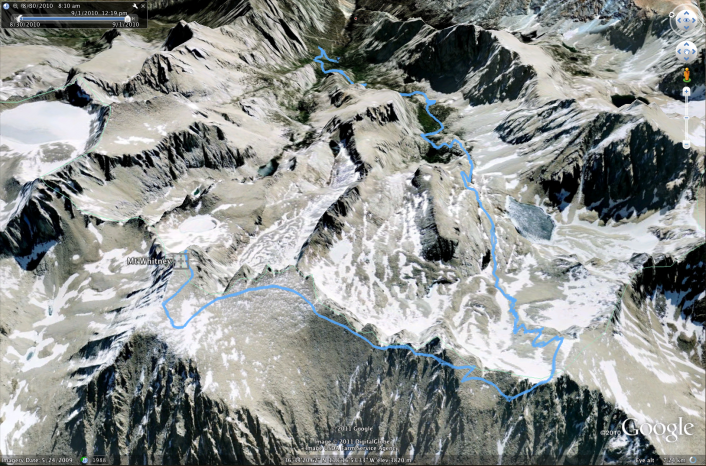 GPS data view from above the summit

Elevation profile from my GPS data for the whole Whitney Trail

The start of the trail at Whitney Portal is a beautiful area. It’s covered in a beautiful forest and the granite peaks of the Sierras surrounding this deep valley.

The view looking forward a little ways past the start

This first picture is the view looking up from just above the start of the trail. The trail actually starts with you walking away from Whitney as you switchback up on your way to that upper valley in the center.

Even from here, the valley floor is almost a mile below. Soon this green section will disappear from view.

This is the view from almost the top of this section of the trail. The last big green view looking down into Owens Valley below.

From just under 10,000 feet there is a diversion you can go on over to Lone Pine Lake. You can see a tiny bit of the blue through the trees.

This deer was hanging out munching on some grass.

Entering the Whitney Zone. Permits are required from here on

The mirror reflection of crazy blue Lone Pine Lake. It looks like a giant sapphire jewel against the surrounding terrain.

Bighorn Park - site of Outpost Camp, the lower camp on the Whitney Trail.

There are two camps along the Mount Whitney Trail. Outpost Camp is a little over 10,000 feet and is adjacent to Bighorn Park. The camp is actually in the forested area to the left.

The waterfall into Bighorn Park at Outpost Camp

Mirror Lake panorama. Fish in the lake kept the surface from being absolutely still

Heading up from Outpost Camp we come upon Mirror Lake. This was a lunch stop for us as we relaxed in the shade.

At the tree line: The Needles are just peeking from behind the foreground ridges

Definitely above the tree line now. The Whitney crest is coming into view

Trailside Meadow shows us some snow at around 11,000 feet. Still another 1000 feet to get to Trail Camp

Another rest stop. Climbing was getting harder as the air got thinner.

Consultation Lake comes into view as we narrow in on Trail Camp. Really looking forward to making it to camp at this point. Trail Camp is the upper camp on the Whitney trail and was our destination for the night. Our immediate neighbors included the guys from Modern Hiker.

First light at Trail Camp. The Sun's rays just crest to hit me with direct rays

My tent. Steaks are useless here in this barren landscape. My tent is tied to a bunch of rocks and is placed behind this ledge for some hopeful wind protection. This is a 2.5 person tent, but really that means 1 person and gear.

Mount Muir is the tall peak in the immediate area of Trail Camp. The view from Trail Camp at dawn

Heading into the infamous 99 switchbacks

From Trail Camp begins a section of the trail referred to as the 99 switchbacks. This section zig zags back and forth to reach the notch a little left of center. From here to the summit is around 5 miles. I shot a time lapse video of people heading into the switchbacks. Check it out in HD as the people get really tiny in frame.

Here is a view looking down at Trail Camp. Consultation Lake is coming into view as is the Owens Valley floor.

The infamous railings on the switchbacks. It's a long slope down on the right.

“The ropes” or railings. This section of the trail has often been referred to as being somewhat treacherous. No problems on our trip.

Looking back at the railings. Note the ice

Zig zag zig zag. Trail Camp lake gets smaller and smaller as we wind up.

There are a lot of switchbacks! I lost caount in the 20’s and gave up. I was too focused on putting one foot in front of the other.

When does it end!

The tiny black dot is a person just left of center standing out into the blue.

At last, Trail Crest is in sight

A significant milestone on the trail. Trail Crest

The other side! At last a view to the other side of the Whitney Crest, and the beginning of a venture into Sequoia National Park from the east side. No park entry booth here!

The other side panorama

From Trail Crest we head down, the first time on the trail we lose elevation on our way to the summit.

The end is in sight. The broad top of Whitney is in view and contrasts with the rocky terrain on the back side of Mount Muir.

Aptly named Guitar Lake more than 2000 feet below us.

At last! The summit hut!

The Smithsonian Hut on the summit of Mount Whitney is in site. We’ve made it!

Imagine building this trail at the end of the 1920’s!

Here I am at the top. A bit weary, but feeling awesome with a sense of accomplishment!

The start of the trail is at the end of the road in the dense forest dead center. The end is where I'm standing.

360 degree panorama from the summit of Whitney. Click and drag to pan. Right click for full screen option.

It was really amazing to stand there. After a four year desire to make it I had accomplished my goal. It was a great feeling. We hung out on the summit for something like an hour before heading down. I had the worst headache in the world due to the altitude, but was otherwise fine.

Looking back at Trail Camp from the summit

The broad back of Whitney and the Needles

Whitney and the Needles make me imagine a giant cookie cutter has carved out the face of these immense peaks.

Treeline Lake naturally is right about at the treeline

The larger of Hitchcock Lakes

The jagged shadow of the Needles over Trail Camp, and one photographer's shadow

I didn’t sleep well the first night, but I did sleep better the second night after summiting Whitney. And, I did so with a smile on my face.

Sunrise at Trail Camp is spectacular. Whitney is the flat top on the right, which due to perspective appears shorter than the needles that are closer.

Another view of Consultation Lake

The view going back is a bit different. Still well above the treeline

Back at Trailside Meadow

Below the treeline again

Mount Whitney from the portal road. Hard to believe I was standing up there the day before.

Mount Whitney in my rear view. Until the next time

For 2011, my application is in. I want to come back with a lot more camera gear to capture some amazing pics. I hope you’ve enjoyed my recounting of this epic hike. Special thanks to my friends Ron and Sarah Rebensdorf for letting me come along on their permit last year!

« My 20 favorite photos of 2010, or something close anyway Tales of a flooded Badwater »

© 2012 Kurt M Lawson Photography. Kurt Lawson is a participant in the Amazon Services LLC Associates Program, an affiliate advertising program designed to provide a means for sites to earn advertising fees by advertising and linking to amazon.com.|ProPhoto Blogsite by NetRivet