It’s the end of the year. Literally. As I write this, I’m sitting at the picnic table of my campsite in Valley of Fire State Park, Nevada. This year I had an overwhelming desire to get away to start the year. I am overdue for a proper solo road trip, and I was determined to take advantage of the time away from the day job to start the year far from the city where I spend most of my days. After spending far too short time visiting family over Christmas, I finally mustered my over-stuffed Xterra onto the highway this morning, on December 31st. On to the list! 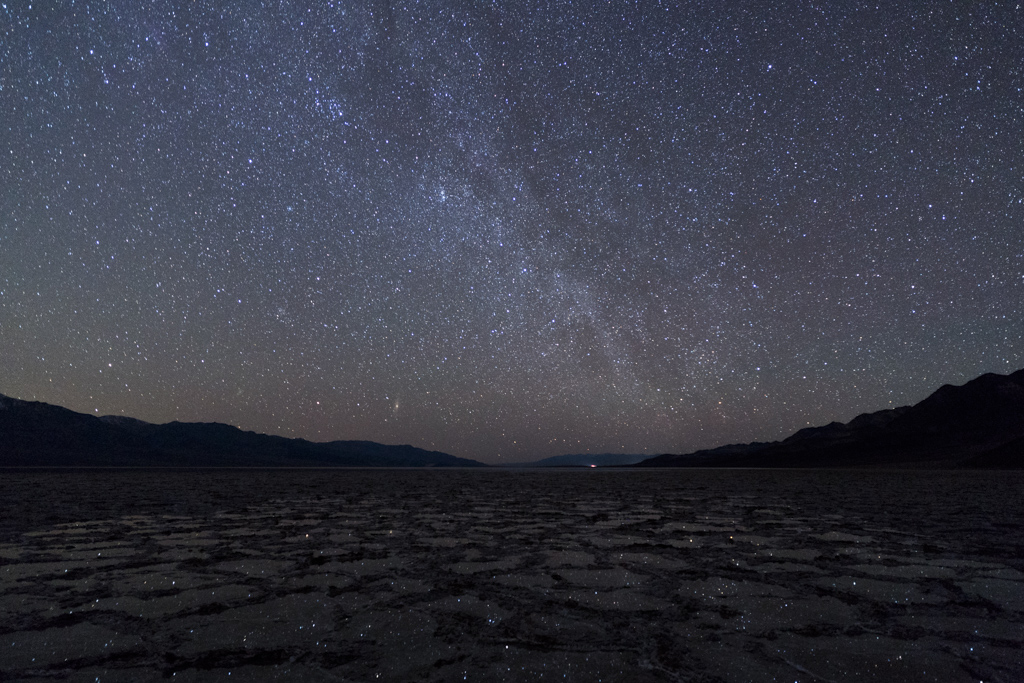 The year started off with spectacular flooding in Death Valley National Park at Badwater. I last witnessed this phenomenon in 2011 and it produced some of my all time favorite images. The park was magical this last winter, and we begin our chronological list with Badwater by star light. To the extreme detriment of my boots, I waded out into the cold salty waters at sunset, where I ran into fellow photographer Jay Tayang, and then returned around midnight after the moon had set for some self portrait action. In addition to that, I shot a few pure star light shots, and I really like the way this looks. 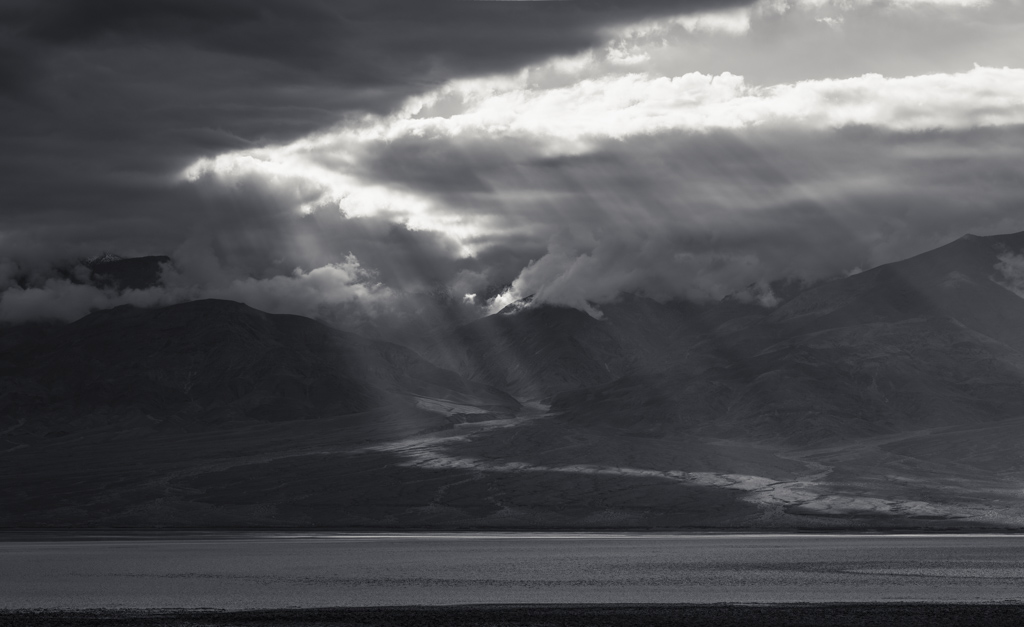 Moving on to the next image, I found this scene unfolding as I was literally moving on from Badwater to… I don’t remember where. This scene unfolded on the other side of the valley and I quickly pulled over and shot it as the crack in the clouds beamed down onto the gentle slopes of alluvium in the Panamint Range. You always have to be watching what is happening with the light around you, especially when there is weather. Non-cloudless days are more the exception rather than the rule in Death Valley, and while I try to anticipate what is going to happen based on experience, this would be hard to predict. 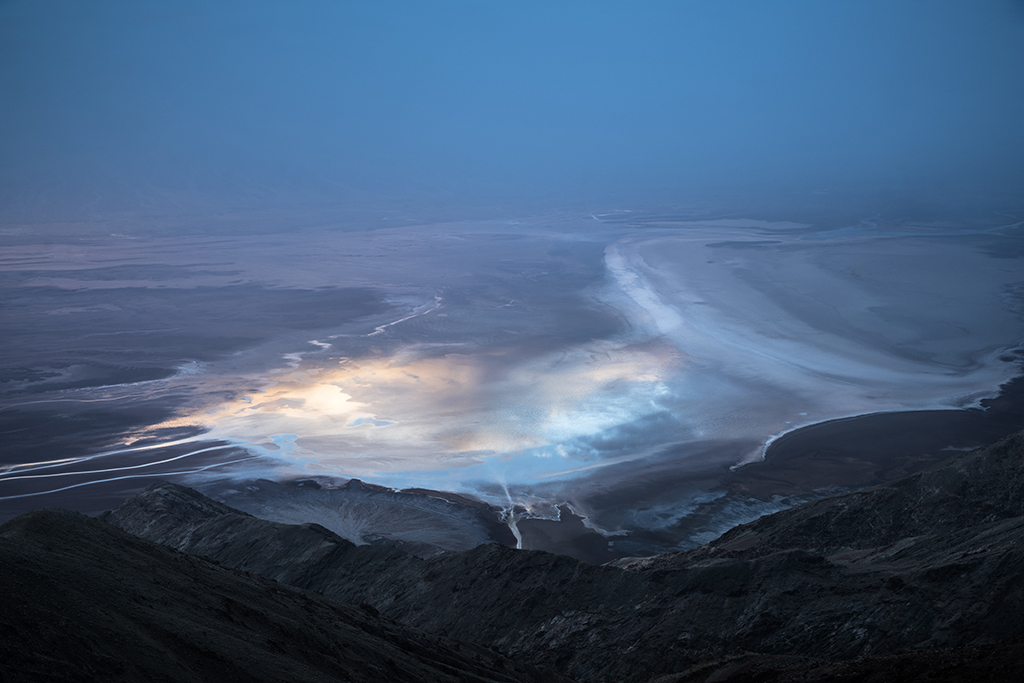 Break in the Clouds

Having taken sunset and sunrise shots at Badwater with the shallow flood, one of the mornings I headed for higher ground. I went high up to Dante’s View, more than a mile above. However, somewhat comically I noticed that the very top of that drive was in the clouds. Nevertheless, I was committed, and set up a couple of cameras anyway hoping for a break in the clouds. To my delight, for a brief moment the cloud roof lifted just enough to peer at the shimmering reflection in the waters down below. The clouds right in my face were still in the shadow of the Black Mountains, and thus were colored deep blue being illuminated by the sky. Looking down at the reflection below, you can make out the reflected direct sunlight of the clouds towards the far side of the Valley, providing a sharp contrast with the shadow blue world I was still in. It didn’t last long before the roof descended down again, but this resulting image is one of my all-time favorites. Although it is also a very frustrating one as the camera sensor turned out to be extraordinarily dirty.

Sunrise in the Badlands

After the waters receded in Death Valley, hope of a superbloom emerged. However, since Death Valley had its superbloom in 2016, the seed bank was depleted, and the superbloom was left to other areas that didn’t go off in 2016 such as Anza Borrego Desert State Park near the Salton Sea. I had always wanted to go to this park, and the promise of a superbloom there was a powerful lure… for me and about a million of my closest friends. Ben Horne I recall was also turned off by the hordes and moved on. So, brushing the flowers aside, I hit up Fonts Point for sunrise and it was magical. The clouds lit up red like fire over the eroded wonder badlands of this neat park.

While the crowds turned me away from Anza Borrego for flowers, Carrizo Plain National Monument’s superbloom sucked me right in. What a neat place! Another photographer had a famous photo of this place during such a bloom referring to it as “Where God Spilled the Paint.” I definitely agree that it does look like spilled paint, and I captured some for my own. My two weekends here were dramatic, with me helping to rescue a stuck vehicle in the mud the first visit and then witnessing and helping another driver who catapulted in reverse a few hundred feet down a ravine on the next. See the video of that here.

Next up is an image of some of the unusual tufa of Mono Lake. These are sometimes called the “sand tufa” because they seem to be made of sand and are far smaller than their carbonate cousins famously lining the lake. I’ve tried before to capture these little sand cities, which remind me of Paolo Soleri’s arcologies. They truly seem like they could be cities out of a scifi movie.

And of course, the Eclipse. This image is from our pool of images from the 36 hour time lapse of the Great American Eclipse as seen over Sawtooth Lake in Idaho’s Sawtooh Mountains. This was my first backpacking trip outside of California and it was amazing. The landscape there is stunningly beautiful. When the eclipse totality arrived, I was unprepared for how awesome it was. Like a light switch going off, a faded daylight suddenly turned into twilight with a 360-degree sunset encircling us. It was incredible, and I hope to repeat this experience in 7 years when another Great Eclipse comes to North America.

Over the years I’ve made many, many trips to the Eastern Sierras chasing fall color. I’ve had mixed results from this, and have always wanted to get a great image of the color along one fo the forks of Bishop Creek. I finally got a composition that I liked, with the reflected canyon light providing soft color and the shade allowing for nicely blurred water. I like how the tree trunk bits point into the water.

Number 9 is a sort of 4-way split. It’s all the same sunset, but the full pano is just overwhelmingly wide. I needed to switch to a 16mm or wider lens in the vertical position to capture the feeling of it a bit better, but instead I have broken it into 3 chunks which each show about 60 degrees of view horizontally. Really I’d like to include a whole bunch more from this sunset, as it is one of the most amazing ones I’ve seen.

Number 10 is this capture of the anticrepuscular rays from Owens Lake. I had no idea this was a thing that could happen until I looked over and noticed it happening the very next day after the sunset pano I was just discussing. Some fog and dust near the ground was thick enough to catch the rays bouncing up from the sunlight reflected from the surface of Owens Lake. It was an incredible unexpected sight amid an intense and beautiful sunrise.

Dad and I and the Milky Way

And finally, a bonus. A self portrait of my father and I in the White Mountains. We visited the Ancient Bristlecone Pine Forest and after dinner I set about to take a photo of the two of us with the Milky Way. It was such a treat to take him with me on a little photo trip and I can’t wait to do it again.

Well that about does it. I can’t wait to see what photo adventures 2018 brings. So far, in Valley of Fire, it’s off to a tremendous start.

« Cable Route of Half Dome Posters and 2018 Calendars Now Available and Framed Print Sale! 10 Favorites of 2018 »

© 2012 Kurt M Lawson Photography. Kurt Lawson is a participant in the Amazon Services LLC Associates Program, an affiliate advertising program designed to provide a means for sites to earn advertising fees by advertising and linking to amazon.com.|ProPhoto Website by NetRivet Sites