It’s that time of the year again. It’s the time of year when we like to collectively examine what has transpired within this unit of time measure of a year. Our collective demarcation of an Earth solar orbit is a significant time scale for us humans, and thus I will attempt to decide on this year’s “10 Best” within that framework as I have been doing for several years now. If nothing else this exercise is great for forcing me to look back on where I’ve been and what I’ve seen and to prioritize images that stick out for one reason or another. For many years I have been largely captivated by Death Valley. I do truly love that park, but by far the dominant National Park for me was Yosemite. But before we get to Yosemite, we start far closer to home in Venice where a stroll to the beach after a storm produced this moment. 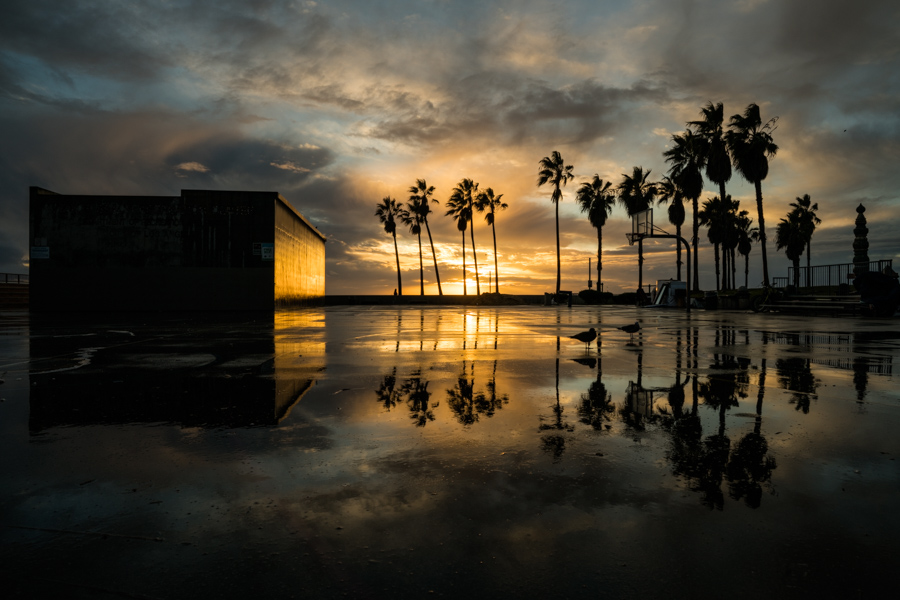 It had rained for several hours until finally, just at sunset, this winter storm back on January 6 broke and the sun shone through in warm sunset tones. The basketball courts of Venice Beach were covered in a thin layer of water that acted as a mirror, broken up by the subtle relief in the court surface as the water drains away. A couple of sea gulls also provide extra breakup. 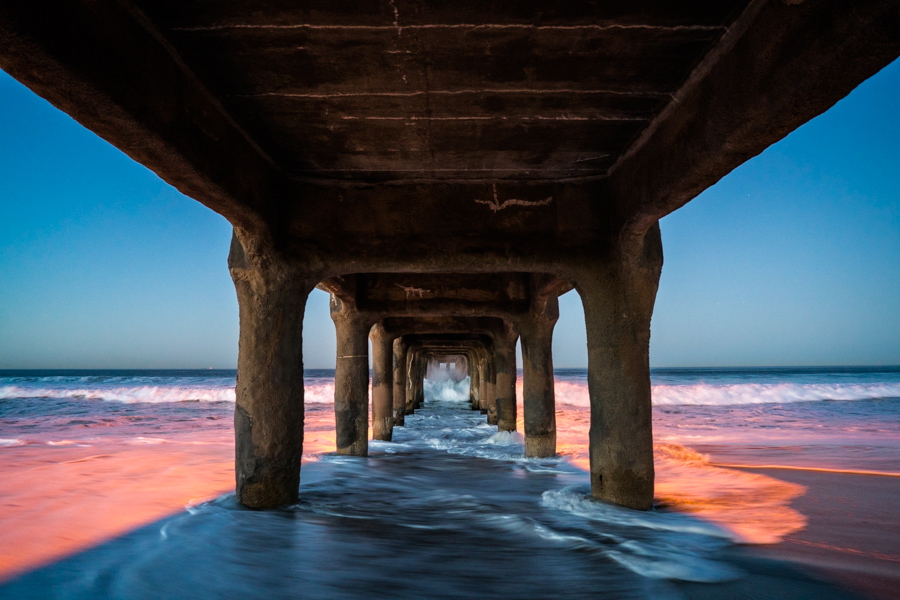 Dawn Under The Pier

Next up we have a return for me to a familiar favorite place: Manhattan Beach Pier. I have loved this pier since the moment I laid eyes on it for the first time in 1996. One day, a number of years ago, I discovered how interesting it can be at night. This time, I arrived just before dawn. The pre-dawn light lifted the sky out of darkness while the odd mixture of lights on the pier provided a colorful palette. 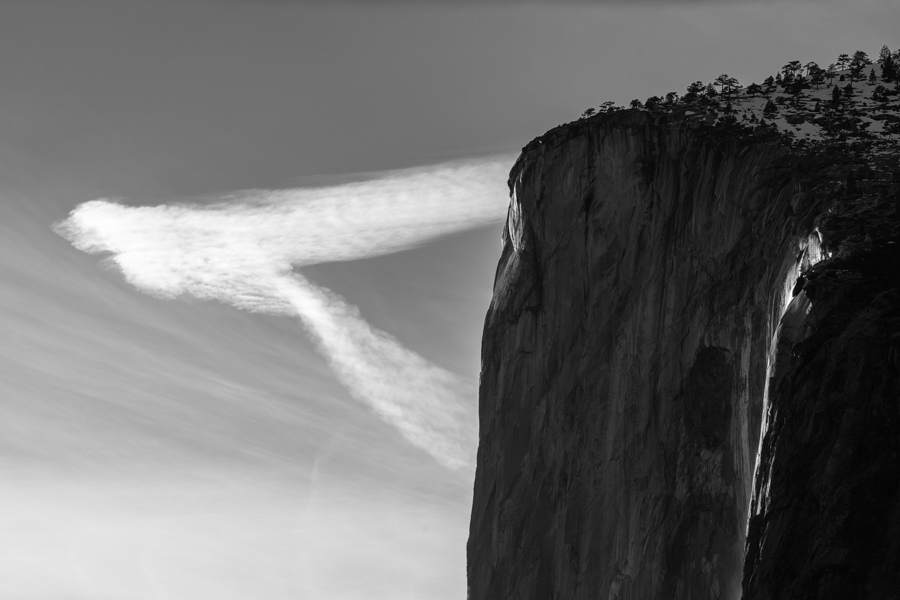 My first trip to Yosemite for the year was a trek to the “fire falls” of Horsetail Falls in February. With this annual event, the sun shines through a small gap to the west to light up Horsetail Falls off the side of El Capitan. This event requires certain wet conditions to be met as the falls only flows after relatively recent storms. I tried to get a perspective away from the hordes of photographers in the valley. While I didn’t quite get to the spot I really wanted, I did watch this < formation drift up the face of El Capitan until it reached this alignment. Ultimately I found this more interesting than any of the fire falls photos I made this trip and it remains one of my favorites of the year.

If you follow my photography you might find the regular landscapes are on occasion interrupted by my love of steam trains. The San Bernardino Railroad Historical Society earlier this year had a night photography session during the brief time that they had their magnificent locomotive, Santa Fe 3751, at the Fullerton Railroad Days event. I wasn’t really expecting a show but wow did they put one on! They lit the fire back on this oil burning locomotive and spent some steam through the cylinder cocks (out the sides) and the dynamos on top and of course out the smokestack. Some flash photography was coordinated but by far my favorite shot I’ve yet taken of a steam locomotive is this one with no flash but just a long exposure.

What can I say about these next two. Yosemite! Like my 97 Switchbacks At Night, these two images feature a well known trail traced by light at night. Unlike that project, this one is done digitally. These images are a shared copyright with friends Sean Goebel and Wade Meade. Spearheaded by Sean, we hauled a ton of gear up to the top of Mount Watkins while Wade scaled Half Dome alone in the dark. Filmed from across the valley with a variety of cameras and lenses, these two images are my versions of the stills, one wide and one closeup. Processing was labor intensive to minimize noise and to remove dozens of airplane trails, but the results were worth it. Check out the time lapse video too. The views of Yosemite Valley from up there were incredible.

This next image is one of the most remarkable sunsets I’ve ever seen in my time in southern California. I was fortunate enough to escape the day job for a few moments to run down to the beach. Just as the sunset was peaking a surfer walked up and started to head into the waves in the fading but spectacular light.

The so-called “super moon” sets over the waters of the Pacific Ocean at dawn in this surreal image. I was down at Manhattan Beach Pier and had almost given up on shooting for the morning when I saw how strange the moon looked just as it was setting on the horizon line. On a Sony a6300 at 400mm, the 600mm equivalent view shows the bizarrely distorted shapes of the moon and the equally strange colors of the ocean reflecting the morning pastel colors of a newly rising sun. It’s just so weird and thus it has remained one of my favorites this year.

In my final trip to Yosemite of the year, I headed in knowing that an incoming storm was likely. After watching a very nice sunset at Tunnel View, I stayed to try to capture the rapid movement of the clouds above. I ended up utilizing a 10-stop neutral density filter to elongate the exposure to a little over two minutes. This allowed the clouds to streak across the sky in the direction of their movement. After first processing this in color I later switched to black and white and love this version quite a bit more.

Sunrise at the Gates of the Valley

And finally, we have sunrise the next morning at the place I always think of as “Gates of the Valley” due to the photo by that name of the most famous of landscape photographers. Getting up at 4:30am was worth it. Hope had not been great for this particular morning, but a break in the clouds to the East made for a few minutes of color explosion across the sky. I’ve been staring at this photo as my desktop for weeks and have really grown fond of it.

So there you have it. As of this moment anyway, there are 10 favorites for 2016. I hope you have enjoyed them and I can’t wait to share more images with you in the future. Happy new year!

« 2017 Calendars Sold Out! Return to the Racetrack. No, the tracks don’t disappear with the next rain. »

© 2012 Kurt M Lawson Photography. Kurt Lawson is a participant in the Amazon Services LLC Associates Program, an affiliate advertising program designed to provide a means for sites to earn advertising fees by advertising and linking to amazon.com.|ProPhoto Website by NetRivet Sites