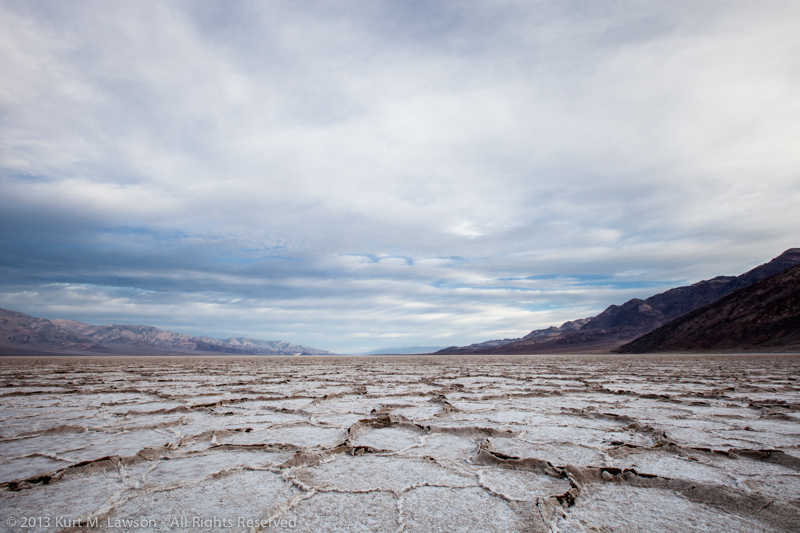 A northern view at Badwater, March 2013

During my first visit to Death Valley National Park, I shot some pictures at sunrise at a location known as Badwater. This is the lowest point in North America, at 282 feet below sea level and thus the final low point for water entering the vast salt pan that makes up the main valley floor. Of course, not all water makes it to this point, but this does fill with a few inches of water on occasion, and in 2005 was deep enough for people to kayak across for the first time. The salt flat was interesting in that first visit. For miles and miles, a pale white-grey texture of salt crystals formed polygons off into the horizon. Mostly, these were very low but were well defined by more dense concentrations of salt crystals. The polygons of mud crusted with salt varied from place to place, but mostly followed a fairly uniform set of characteristics through the main part of the Badwater salt flat area. Here is a view to the north in 2008: 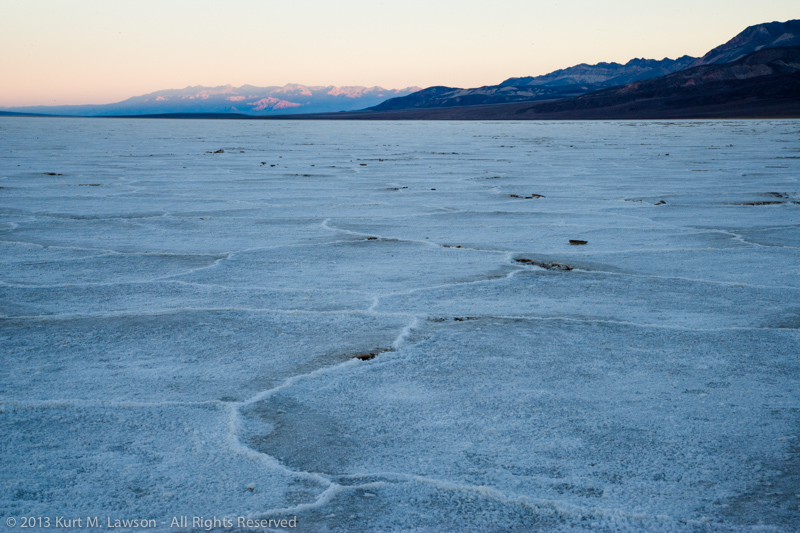 A northern view at Badwater in 2008

All in all, I honestly didn’t find the Badwater area to be terribly interesting. I was intrigued by the contrast to the west when standing in the shadow of the Black Mountains while the Panamint Range was fully bathed in sunlight, but the actual ground didn’t inspire me on this first visit and I didn’t come back for a few years. In late December 2010 everything changed at Badwater. Heavy rains flooded the salt flat with several inches of water. Whatever the salt flats looked like prior to being flooded, the flood waters erased everything. This made for some awesome images, including many that are my personal all-time favorites. Here though is a similar angle during the day. You can see the mud under the water. There is no sign of the salt crystals or the vertical uplift of polygonal shapes. In fact, there’s nothing of the polygons at all. The surface has been erased back to flat mud, with little bits of texture dotting the underwater landscape. 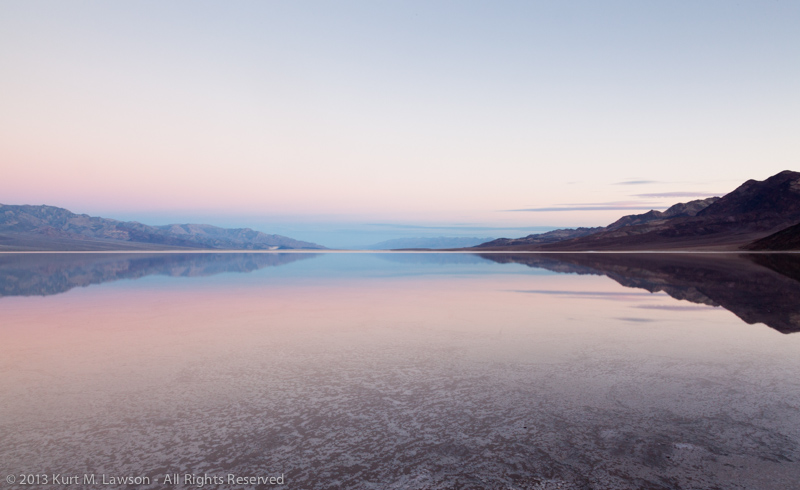 A northern view at Badwater, January 2011

As soon as I freed up from work again, I headed straight back in the hopes that the water might still be there. What I saw instead was a vastly different landscape.

A northerly view at Badwater, March 2011

The water was gone. There was fresh salt everywhere. There were no polygonal shapes, only dotted miniature mesas as far as the eye could see, and salt crystals so bright white that it was at least as bright as snow. I was blown away by the change in the landscape. I returned in November to shoot my Christmas card. This time new polygons had formed. The flats were still brilliant bright white crystal salt, however.

A northerly view at Badwater, November 2011

In January 2012, the polygonal surface looked different yet again:

A northerly view at Badwater, January 2012

And finally we get to the present day, which can be seen in the first image at the beginning of this post, and here is also a western view from the same location showing the extent of the uplift.

The mud and salt crust at Badwater to me resembles the very fundamental forces that created mountain ranges everywhere. Here is my hypothesis based on my own random visits and observations. It seems as though the mud and salt solidified after the flood in 2011 into a fairly consistent texture. Then, as the environment of Death Valley added and subtracted moisture to the salt flat, the crust began to expand and contract with the temperature changes and the forming and dissolving action with moisture. Eventually, cracks form which allow more moisture to seep through with more salt, concentrating the salt at the cracks. The overall cracked pattern appears like that of dried mud but on a larger scale, with some polygonal chunks a few feet across. With the concentration of salt along the cracks, the crystals there begin to push the plates apart from one another as they grow. This creates uplift at the edges as the different sections of crust expand outward and crack along the edges forming miniature mountain ranges. The current state of Badwater seems similar to what I found at the edges of a circular white salt flat in the middle of largely mud about 3/4 a mile from the road to the south of Badwater. Here along the edges the salt had fractured up nearly a foot off the floor, tapering off into more flat white patterns towards the center of the circle. So perhaps what is happening now at Badwater is similar to what was happening at the edges of this circle, indicating less and less water until ultimately the salt flat just turns into mud resembling the Devil’s Golf Course section.

Huge uplift at the edge of circular salt flat, March 2011

Badwater is a much more fascinating place to me now since that first visit in 2008, and I have new appreciation for the way the Death Valley landscape is constantly changing. I wonder if anyone has done a study of the stages of the changing landscape at Badwater. It certainly seems to have cycles. I wonder what it will look like during my next visit. I’m looking forward to finding out.

© 2012 Kurt M Lawson Photography. Kurt Lawson is a participant in the Amazon Services LLC Associates Program, an affiliate advertising program designed to provide a means for sites to earn advertising fees by advertising and linking to amazon.com.|ProPhoto Blogsite by NetRivet Websites